Broaden the possibilities of your Star Wars™: X-Wing games with the Epic Battles Multiplayer Expansion!

Within this expansion, you’ll find five wing tools, eight upgrade cards, seven Wing Quick Build Cards, and everything else you need to stage your own epic X-Wing battles!

Whether fought between the Galactic Empire and Rebel Alliance, the Resistance and the First Order, or the Galactic Republic and the Separatist Alliance, the Star Wars saga is defined by massive space battles that pit groups of heavily-armed warships and dozens of smaller starfighters against one another. Soon, you’ll have the chance to enter these battles and test your mettle in some of the most intense and chaotic space battles in the Star Wars galaxy.

Featuring eleven cinematic scenarios—from team games to chaotic, eight-player, free-for-all battles—Epic Battles broadens the possibilities of X-Wing, creating an exciting new experience for players of all skill levels. In addition to the scenarios and rules for playing with more than two players, Epic Battles also introduces wings, an exciting new way for players to control multiple ships in formation using only a single maneuver dial. Wings work particularly well when flying in conjunction with huge ships, the largest class of ships available in X-Wing.

In the white-knuckle space battles of X-Wing, the only thing a pilot can rely on is their wingmates. When flying together, pilots can cover each other with valuable fire support and, if your squadron includes limited pilots, their abilities can synergize to benefit the entire squadron. Now, Epic Battles lets you use wings to truly harness the power of groups of starfighters flying in formation.

Moving together using a single dial, wings let you easily navigate groups of three to six ships through the chaos of battle and use them as a combined force to complete your objectives. Within the Epic Battles Multiplayer Expansion, you’ll find everything you need to form complete wings of starfighters, including two full-size wing tools, two mini wing tools, and a corner wing tool, as well as eight wing upgrade cards, seven wing Quick Build Cards, and twenty-four wing ID cards to easily track every ship in your wings. 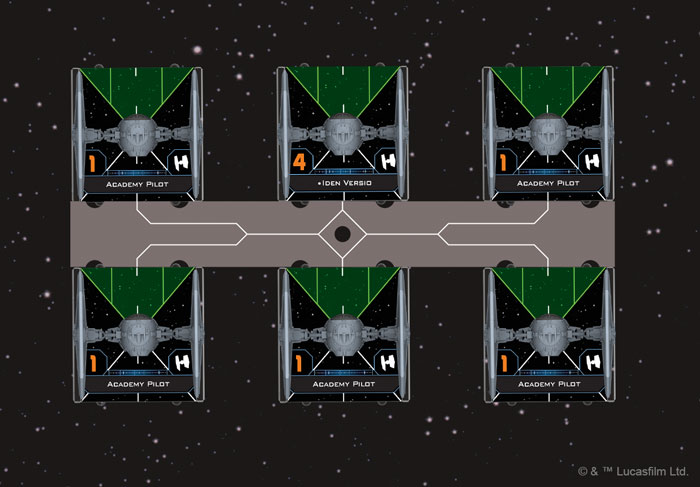 The full-size wing tool makes it easy to arrange your ships in formation!

No matter how many wings you choose to fly, each wing is commanded by one wing leader, who executes maneuvers normally while their wingmates form up around them. Each ship in the wing has a specific position in the formation and the five wing tools found in Epic Battles help to quickly arrange your ships. To arrange ships around a full-size wing tool, for example, you’ll simply align each ship’s center line with the corresponding line on the tool.

Wings not only make flying in formation easier, they also speed up gameplay considerably, accelerating resolution even when there are many ships in play. But wings also change the makeup of your squadrons, granting special abilities. If you choose to make a TIE Advanced x1 or TIE Advanced v1 pilot an Agent of the Empire, for example, they can be accompanied by a complement of TIE/ln fighters that can put themselves in harm’s way to defend their leader. 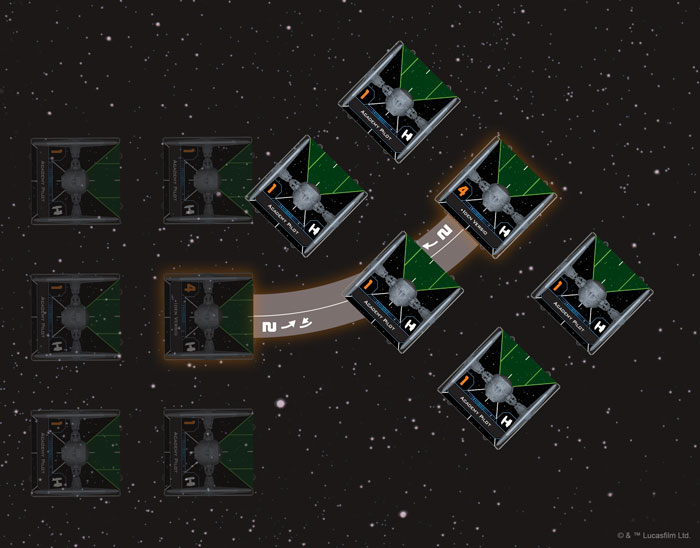 When flying as a wing, the wing leader executes maneuvers normally and their wingmates form around them!

Wings of starfighters are usually just one part of larger battles and Epic Battles expands the scale of X-Wing to accommodate these groups of fighters. In addition to the tools you need to form and fly wings, this expansion also features eleven unique scenarios and all the components you need to play them.

From taking desperate defensive actions as friendly transports escape to daring assaults on enemy fortifications, each scenario provides a new way to play X-Wing. While many of these scenarios see two players facing off in tense head-to-head combat, others bring in more players for team battles or epic free-for-alls between three or more players. 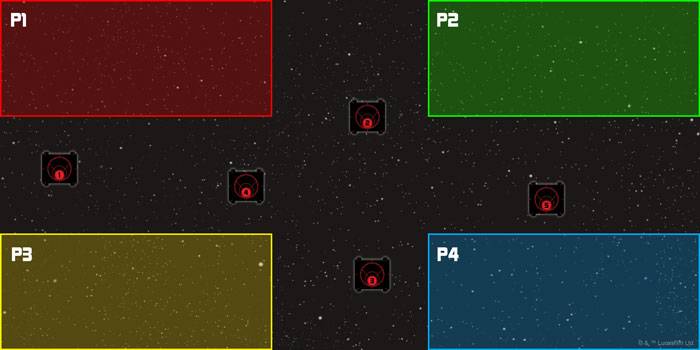 In the Intel Pickup scenario, two to four players deploy their ships to collect data from satellites!

In Intel Pickup, for example, two to four players compete for control of satellites that have been gathering key hyperlane data. Eager to seize this information, several factions have appeared to claim the satellites as their own. During this game, players must contend with enemy ships while trying to secure the data from five satellites placed around the board.

The scenarios you find in Epic Battles don’t just add a cinematic feel to your games. Many allow you to exceed the squad-building restrictions placed on other games of X-Wing, giving you the chance to build massive 500-point or 20-threat squadrons. As such, these engagements are a natural fit for huge ships, such as the Raider-class corvette and the C-ROC cruiser. While they are not required for the Epic game mode, these massive vessels give you powerful new options for you fleets, allowing you to strike at long range with devastating turbolasers, command smaller fighters, and disrupt enemy battle plans with electronic warfare.