The C-ROC Cruiser Expansion Pack contains everything both Scum and Villainy and Separatist Alliance players need to incorporate one of these armed transports into their squadrons.

A selection of ship cards, tokens, and maneuver dials gets your C-ROC into battle while a suite of upgrade cards invites you to add a bevy of dirty tricks to your cruiser.

The C-ROC cruiser is the heaviest vessel available to many criminal operations, cartels, and syndicates in the Outer Rim, capable of carrying massive weapons batteries and unique dirty tricks that keep it one step ahead of the law. Whether it’s hauling illicit cargo or marauding the hyperlanes in search of easy targets, the C-ROC is a flexible and dangerous craft.

Despite its large size, the C-ROC cruiser’s overdrive burners make it a surprisingly elusive ship, capable of avoiding incoming fire. Many criminal operations take advantage of this elusiveness to move massive amounts of illicit materials under the nose of local authorities. During the Clone Wars, the Separatist Alliance would often make use of unsavory contacts such as these—including corsairs and criminal cartels—in its fight against the Galactic Republic. 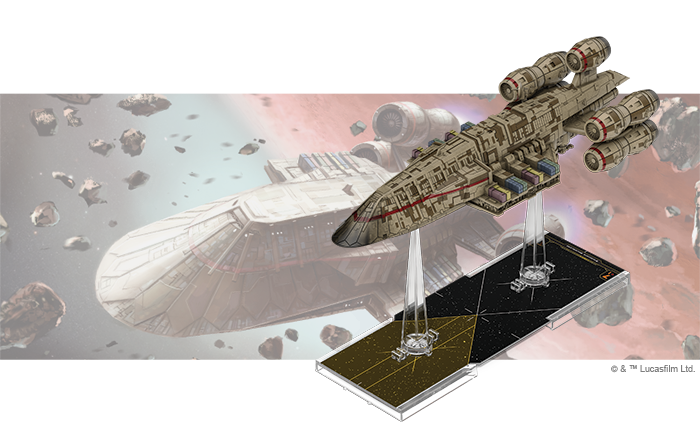 The C-ROC Cruiser Expansion Pack contains everything both Scum and Villainy and Separatist Alliance players need to incorporate one of these armed transports to their squadrons. A selection of ship cards, tokens, and maneuver dials gets your C-ROC into battle, while a suite of upgrade cards invites you to add a bevy of dirty tricks to your cruiser. Finally, a plastic maneuver tool, huge ship resource tracker, and huge ship damage deck make managing your ship fast and easy.