Your investigations have led you to the island commune of Mont Saint-Michel, as brooding, dark clouds cover the sky.

A storm is coming—and it’s unclear if our world will survive. Black Stars Rise offers the latest chapter in The Path to Carcosa cycle for Arkham Horror: The Card Game, and the latest tale of your own madness.

Between the new player cards included in this Mythos Pack and an adventure unlike any other, Black Stars Rise races towards the stunning conclusion of the Path to Carcosa cycle.

Long after The King in Yellow was first performed at Arkham’s Ward Theater, strange occurrences have continued to wreak havoc on those who witnessed the cursed play. You could not find the answers you sought in Arkham. Tracing back the history of the play, you voyaged across the sea to Paris and delved deep into the catacombs where few dare to tread. Even that was not enough. As the mystery unravels, you follow the trail to Mont Saint-Michel where a storm is brewing. Hastur is coming….

The island commune of Mont Saint-Michel is both elegant and enigmatic. During low tide, you would be able to walk across the tidal causeway to reach the island, but when you arrive the tide is higher than you anticipated or even thought possible. Dark clouds circle overhead, blacking out the sun, and the distant roar of thunder speaks of an approaching storm. With a rare stroke of luck, you find a boat with a captain willing to take you to the island, and prepare for the ritual to come.

As the Black Stars Rise, there is no hope for escape. This Mythos Pack, which can be played as a standalone adventure or as part of the larger The Path to Carcosa campaign, has no Act deck. Rather, the only agency you have is in choosing how you will meet your doom with two Agenda decks in play at any given moment. By investigating the island locations, you will uncover clues that you can spend to advance the agenda of your choice.

Advancing one agenda will bring you closer to opening a path to lost Carcosa, while the other will provide Hastur with a chance to escape into our world. 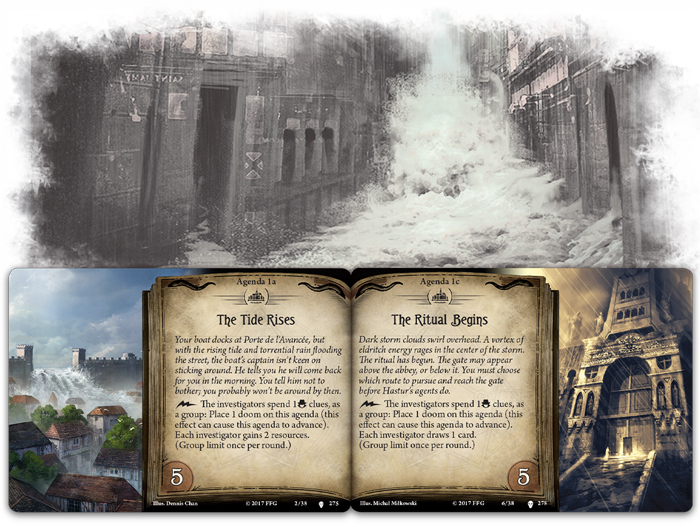 In some instances, you will have no choice which fate you suffer, such as when doom is placed on a location you visit or a monster you encounter. This counts towards the doom threshold on both agendas. But perhaps the freedom from choice is a blessing when your options may lay bare your soul for all to judge.

A Rift Seeker (Black Stars Rise, 301) may force you to make an impossible decision when they attack: either take an additional blow to both your health and sanity or place one doom on each agenda in play. Do you push yourself closer to the brink of death or sacrifice yourself to protect the world, when you know it will only delay the inevitable?

This is not a standalone product. It requires the Arkham Horror: The Card Game Core Set and The Path to Carcosa deluxe expansion to play.

This website uses cookies to improve your experience while you navigate through the website. Out of these, the cookies that are categorized as necessary are stored on your browser as they are essential for the working of basic functionalities of the website. We also use third-party cookies that help us analyze and understand how you use this website. These cookies will be stored in your browser only with your consent. You also have the option to opt-out of these cookies. But opting out of some of these cookies may affect your browsing experience.
Necessary Altijd ingeschakeld
Necessary cookies are absolutely essential for the website to function properly. These cookies ensure basic functionalities and security features of the website, anonymously.
Functional
Functional cookies help to perform certain functionalities like sharing the content of the website on social media platforms, collect feedbacks, and other third-party features.
Performance
Performance cookies are used to understand and analyze the key performance indexes of the website which helps in delivering a better user experience for the visitors.
Analytics
Analytical cookies are used to understand how visitors interact with the website. These cookies help provide information on metrics the number of visitors, bounce rate, traffic source, etc.
Advertisement
Advertisement cookies are used to provide visitors with relevant ads and marketing campaigns. These cookies track visitors across websites and collect information to provide customized ads.
Others
Other uncategorized cookies are those that are being analyzed and have not been classified into a category as yet.
OPSLAAN & ACCEPTEREN
Sluiten