Add the staff and graduates of the Empire’s most prestigious academy to your Imperial squadrons with the Skystrike Academy Squadron Pack for Star Wars: X-Wing! Academies throughout the Empire train the next generation of TIE pilots and Skystrike Academy’s graduates are instilled with the skills and dedication necessary to maintain order in the galaxy.

This Squadron Pack includes talented and loyal pilots such as Vult Skerris and Ciena Ree, featuring new abilities and upgrades based on their appearances in Star Wars: Rebels and Lost Stars. In addition to these pilots, you’ll also find one TIE/D Defender miniature and two TIE/in Interceptor miniatures featuring bold alternate paint schemes in this expansion, adding even more diversity to your Imperial squadrons!

In this expansion you’ll find 10 TIE/in Interceptor ship cards and 5 TIE/D Defender ship cards, giving you even more pilots to choose from. Additionally, 35 upgrade cards invite you to further customize your Galactic Empire squadrons including new configuration cards for the ships and content for Epic play. To srap things up, six Quick Build cards help you get these pilots and upgrades into the fight as fast as possible with convenient preset selections.

The hardened recruits of Skystrike Academy are the elite test pilots of the Galactic Empire. These promising individuals undergo ruthless training, testing some of the Empire’s most potent and experimental starfighters. At the head of Skystrike Academy is Commander Vult Skerris , a notorious pilot known for his skill and cunning. His pilot ability allows you to delay his action until after all ships have moved, giving you perfect information to select the most effective action before engaging.

As leader of Admiral Thrawn’s TIE Defender initiative, Vult Skerris is entrusted with the testing and development of the experimental TIE/D Defender Elite prototype. This new variant boasts increased maneuverability and advanced fire control systems for what is an already effective platform. Expanding their research, the Skystrike Academy employs a number of modifications in their testing that extend to other starfighter chassis as well. One example being the modification of TIE/in Interceptors with more Sensitive Controls to further test the limits of both their pilot’s abilities and the craft itself. Regardless of the implementation, the testing of new technology by the Skystrike Academy presents a very real threat that the Rebel Alliance cannot leave unanswered.

This Squadron Pack adds two TIE/in Interceptors and a TIE/D Defender to your X-Wing collection, each sporting a new Skystrike Academy paint scheme based on their appearance in Star Wars: Rebels. Three small plastic bases, three dials and several small ship tokens are also included. In the expansion you will find 5 TIE/D Defender ship cards, 10 TIE/in ship cards and 35 upgrade cards that give you many tactical options to help assert the superiority of the Galactic Empire. 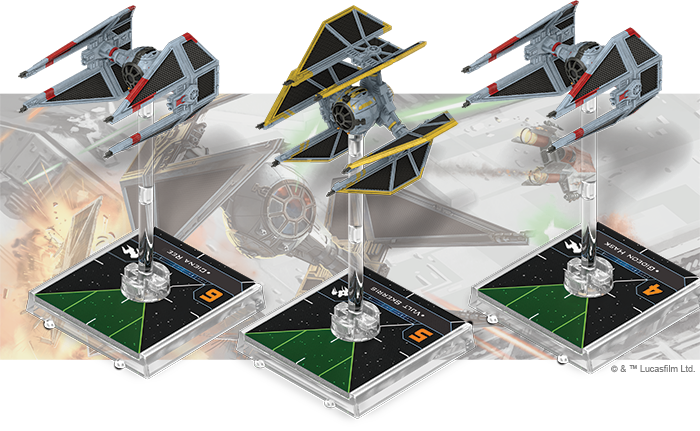