This is not a standalone game experience. A copy of the Star Wars: Armada Core Set is required to play.

The Onager-class Star Destroyer is a specialized platform for some of the Empire’s most dangerous weaponry. The arrival of its ominous silhouette in orbit heralds a bombardment by massive particle cannons, or, more rarely, a devastating pulse from superheavy composite beam turbolasers. Its deployment in more sensitive Imperial operations can be neither confirmed nor denied. 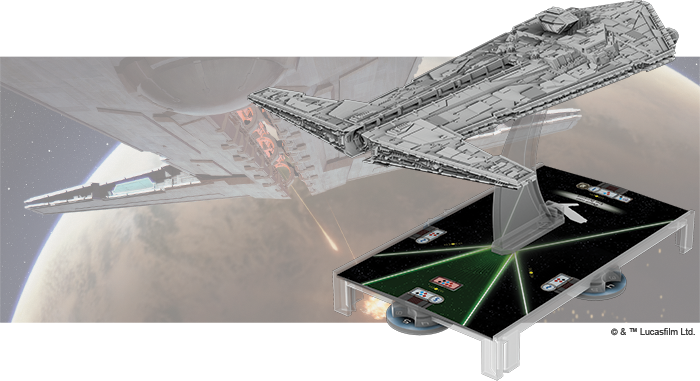 What makes the Onager-class Star Destroyer unique among the Galactic Empire’s specialized collection of ships is its special battery armament. By using its this armament, this incredible ship can perform ignition attacks beyond long range, keeping its crew safe while still wreaking havoc on enemy forces. On top of this remarkable ability, the Onager-class Star Destroyer Expansion Pack provides everything that you as a skilled imperial officer need to add one of these elite vessels to your fleet, including a painted ship, a speed dial, and three command dials as well as two ship cards and fifteen upgrade cards.

Among the officers you may choose to helm your Onager-class Star Destroyer, you will find the assertive Commander Beck. Up to two times during your activation, Beck allows you to resolve a command as if you had spent a command token. If you do, you gain a raid token that prevents you from resolving the matching command type again until you are able to clear it. While this opportunity does come at a cost, it may be well worth it to wipe out a key part of your opponent’s fleet in one fell swoop. With the full power of the Empire at your back, the battle will nearly be over before it even begins.