Root: The Clockwork Expansion allows players to square off against four fiendishly automated factions that can be used in solo, competitive or cooperative games.

A base game of Root required. 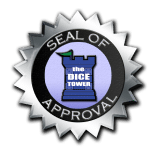 Return to the world of Root with The Clockwork Expansion.

Root: The Clockwork Expansion allows players to square off against four fiendishly automated factions. Insert a faction to round out a low-player count game or team up for co-operative play! Compete against the: