With the mythical hammer Mjolner, Thor has the power to defeat even the strongest of foes with legendary strength and power.

Like all Hero Packs, the Thor Hero Pack includes a fully-playable deck right out of the box that includes 15 Hero cards, 17 cards from the Aggression aspect, and 8 neutral cards.

This deck allows you to harness the power of Thor, who is rewarded for engaging and dispatching villainous minions from the field!

This deck introduces the God of Thunder to Marvel Champions. With Mjolnir in hand, Thor is an aggressive hero who can dispatch minions with ease. Best of all, this pack includes a full deck ready for use right out of the gate, a nemesis set featuring the trickster God Loki, and several additional basic and aspect cards to increase your deckbuilding options! 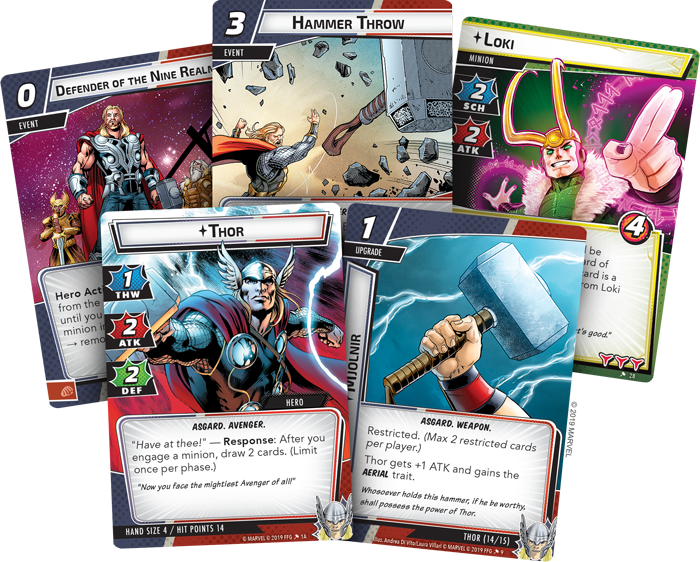 To challenge a God is a foolish endeavor for any mere mortal, even more so when that God is the mighty Thor. A skilled combatant who lives for the glory of battle, you draw two cards when he engages a minion, giving him more fuel to unleash powerful attacks. Better yet, with 14 hit points, Thor can take on all comers and come out unscathed. 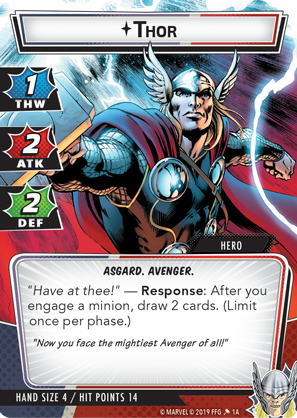 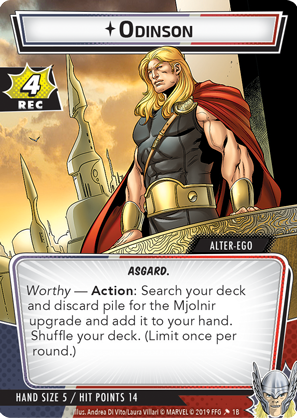 But should he need to recover or prepare for the coming battles, he can always become Odinson to call forth the legendary hammer Mjolnir and recover some valuable hit points. With Mjolnir in hand, Thor gains the Aerial trait and can easily defeat any minions foolish enough to challenge him.

Or perhaps Thor can challenge them. Defender of the Nine Realms sees Thor searching for a worthy foe while removing threat from a scheme along the way. If this minion is the first one you’ve engaged with this round, you’ll also get to use Thor’s ability, putting Thor in the perfect position to smash his enemies to pieces.

For example, a well timed Defender of the Nine Realms can provide a Hammer Throw, a massive attack utilizing Mjolnir. While 8 damage may seem like too much to deal with a small minion engaged with him, the Overkill ability ensures the attack is never wasted.

With a thirst for battle, Thor and his allies are perfect for the Aggression aspect. With the strength of a God, Hercules shares Thor’s love of a fight, and the more minions you are facing, the easier it is to have Hercules share in the revelry. 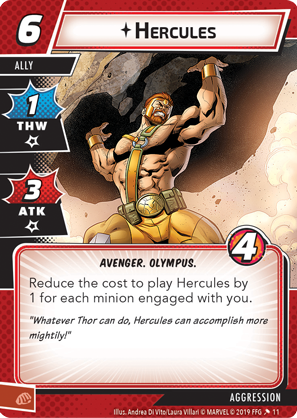 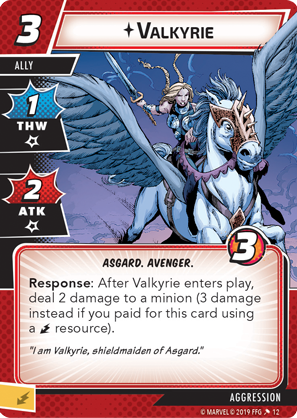 If you need even more assistance, Valkyrie, the shieldmaiden of Asgard, can immediately defeat most minions when she enters play. If that still doesn’t do the job, Valkyrie’s two attack can cut enemies down to size in no time!

These allies and more fill out the rest of the pre-constructed Thor deck included in the pack. With the strength of a God and the power of Thunder, Thor can tear through your enemies and go toe-to-toe with the most iconic villains in the Marvel Universe!