Journey to the mysterious Dreamlands in To Fight the Black Wind! This Arkham Horror novella by Jennifer Brozek invites readers for a visit to Arkham Sanatorium where psychologist Carolyn Fern is searching for the cause of a patient’s terrible nightmares that leave her both mentally and physically scarred. With detailed, full-color inserts of Dr. Fern’s case notes, readers take on the role of investigator themselves to find a way to help the young patient before the terrors of her dreams infect the waking world. The mind is powerful tool, but knowledge is dangerous.

In addition to a hardcover copy of the novella, To Fight the Black Wind includes four exclusive cards to add Carolyn Fern as an investigator in Arkham Horror: The Card Game. These cards allow readers to build a deck for Carolyn Fern, complete with a signature asset and weakness, and mark her first appearance in the game. With these new implements to build your investigations in the Arkham Horror Files universe, you are prepared to defend your patient and discover what it takes To Fight the Black Wind!

Not all patients can be cured—or want to be.

Psychologist Carolyn Fern’s newest patient suffers from nightmares that leave glyph-shaped wounds across her skin. The case is odd, even for an institution like Arkham Sanatorium, where the unusual becomes the everyday. Things become even more complicated after the young woman claims to have met Malachi—Carolyn’s former patient whose treatment was cut short when he was brutally murdered—in her dreams. What is the link between the two, and how can Carolyn help a patient who, it seems, does not wish to be cured? 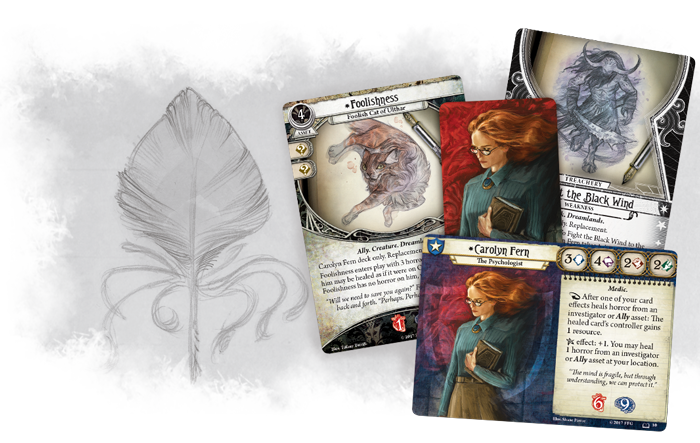 To Fight the Black Wind takes you to the halls of Arkham Sanatorium, where visiting psychologist Carolyn Fern is trying to understand her new patient, Miss Josephine Ruggles. The young heiress has come to the asylum of her own volition, seeking help with her nightmares. These haunting dreams leave her back torn and bloodied, with weeping wounds that appear to be written in some strange language at once alien and familiar. Stranger still, the marks pucker as if they were pushed out of her rather than scratched in.

After researching possible solutions at Miskatonic University’s Orne Library, Carolyn attempts hypnotherapy to help her patient face her nightmares. But as she tries to draw the young woman out of her madness, the psychologist finds herself transported to the Dreamlands, where the rules of the waking world do not apply. The place is curious, dangerous, and all too real. In the surrealistic landscape, Carolyn learns that our world is but one plane, one facet that makes up the whole of existence. Here, Elder and Outer Gods battle for dominance and her patient is inextricably linked to one of the maddening entities. Both Josephine and the Dreamlands are in grave danger, but how can a doctor protect her patient from entities that mortals were never meant to understand? 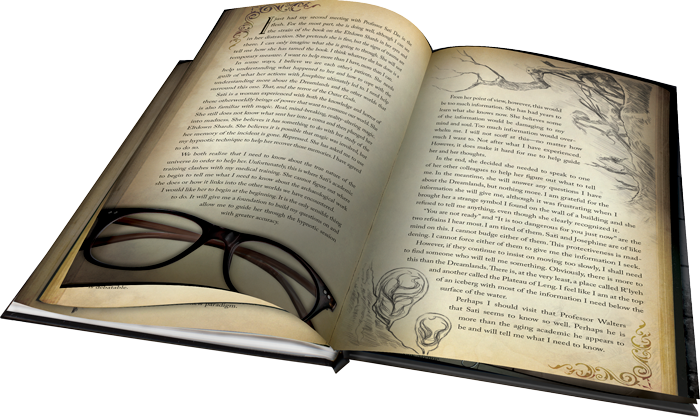 In addition to the story itself, To Fight the Black Wind includes fifteen pages of full color inserts. These primary sources provide you with newspaper clippings and Carolyn Fern’s personal journal, recording her encounters in the Dreamlands and her progress with the case to draw you further into the investigation and immerse you in the Arkham Horror Files universe. Only by closely studying the evidence will you be able to survive the journey through the Dreamlands and guard Josephine against the dangers that reside there.

Once you accompany Carolyn Fern on her quest to save Miss Josephine Ruggles, she may choose to help you in the future and join your team of investigators in Arkham Horror: The Card Game. This is her first introduction to the game, though she will also appear in a future expansion for the game. Carolyn Fern is a woman of learning, but as a doctor, her true mission and desire is to protect the patients in her care, making her part of the Guardian class. However, she is still driven by her wish to understand the Mythos as the world is widened and its mysteries are laid before her, enabling her to include either Seeker or Mystic cards in her Investigator deck. 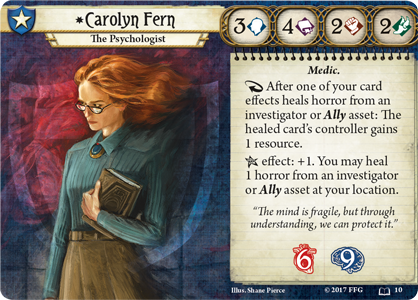 Carolyn will prove a valuable addition to your investigators as your adventures bring you in close contact with maddening creatures and vengeful gods from beyond the reaches of our world. In fact, the psychologist can use her contacts within the medical community to earn funding for proven success in her field. After one of Carolyn’s card effects heals horror from an investigator or Ally, the healed card’s owner gains a resource. Beyond this, the good doctor will gladly assist anyone she can during an investigation. If Carolyn strikes luck and draws an Elder Sign token from the chaos bag, she may heal one horror from an investigator or Ally in her location. The mind may be fragile, but through understanding, it can be protected.

“I love that kitty. He is his namesake, but he is an ally.”
–Josephine Ruggles, To Fight the Black Wind 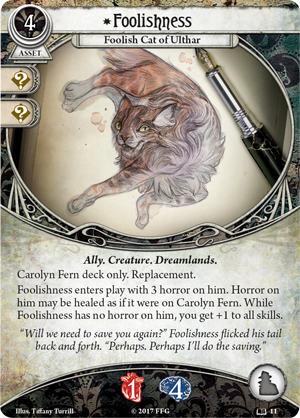 In the mysterious Dreamlands, you will encounter a menagerie of strange creatures, both fair and foul. Here, all are as they should be and are named for their identities, not their masks. In Ulthar, where no man may kill a cat, you will find the feline Foolishness. Foolishness enters play with three horror on him, which can be healed as if it were on Carolyn Fern. While Foolishness has no horror on him, all of Carolyn’s skills are increased. The cat may need to be protected from his own nature, but his loyal heart and knowledge of the Dreamlands make him a powerful friend.

For all its beauties, the Dreamlands also holds great danger for those who visit there, threatening their sanity. Carolyn’s personal treachery card, To Fight the Black Wind, forces the psychologist to become personally responsible for the mental health of all her companions. When this Task is revealed, it is attached to the current agenda and Carolyn Fern immediately suffers one horror, knowing that she has brought this terror on her fellow investigators. At the end of the round, if any amount of horror was assigned to an investigator and it is not healed, one doom must be placed on the attached agenda. Carolyn Fern is a master in her field, but this duty is more than any one person should have to bear. One thing is certain, Carolyn Fern will do anything within her power to ensure that those who rely upon her remain safe and sane.

Ready your mind for a maddening journey into a realm you know, but only in your dreams. Confront the dangers of the Dreamlands and help Carolyn Fern find what it takes To Fight the Black Wind!