Take on the creatures that dwell between worlds in Ire of the Void! In this thrilling novella by Richard Lee Byers, astronomer and Miskatonic University professor Norman Withers seeks to restore his reputation among Arkham’s academic elite after doubt of his claim of observing the disappearance of six stars. With the help of a visiting physicist, Withers investigates a series of scientific conundrums that lead to his comrade’s disappearance into the void between worlds, and now both men are hunted by the vengeful hounds that reside there.

Take on the role of the investigator yourself with detailed full-color inserts of Norman Withers’ gathered evidence, complete with the astronomer’s notes. In addition to a hardcover copy of the book, Ire of the Void includes four promotional cards to allow readers to build a deck for Norman Withers in Arkham Horror: The Card Game. With new tools and obstacles to enhance your investigations, you will be prepared to take on the forces of darkness like never before!

How could six stars vanish from sight all at once, never to reappear?

Norman Withers has perhaps made the greatest scientific discovery in the history of Miskatonic University, one that could earn him prestige and international fame. There’s only one problem—nobody believes him. So when a young student of Albert Einstein himself comes to Arkham, Norman seizes the chance to prove his discovery to the world. When the physicist mysteriously goes missing, Norman finds himself in a desperate fight against time and the creatures that defy scientific explanation. Fantasy Flight Games is pleased to announce that Ire of the Void, the latest Arkham Horror novella complete with four new cards for Arkham Horror: The Card Game, is on sale now!

A Quest for Truth

Ire of the Void, a thrilling novella by Richard Lee Byers, transports you to Arkham, Massachusetts at the height of the Roaring Twenties. Here, astronomer and Miskatonic University professor Norman Withers struggles to regain his standing among the city’s academic elite. His opportunity arises when guest speaker, a protégé of the renowned Albert Einstein, arrives on campus. This man may hold the key to Norman’s redemption. If the visiting physicist can help Norman explain the phenomenon of the vanishing stars, his credit will surely be restored.

Unfortunately for Norman, it soon comes to light that the young physicist has his own unsettling theories about the curvature of space-time; theories that have drawn him across the sea to Arkham and that he now needs Norman’s help to prove. With his reputation on the line, Norman has little choice but to offer his aid, no matter how insane the idea. But when the two men begin working to unwind these experimental conundrums, they find they are no longer the seekers of knowledge. They are themselves being sought out, as the physicist is swallowed by nothingness and a dark, unknowable entity is left in his place. What creatures lurk in the angles of time and how can a man of science stand up to beings that defy the laws of reality? 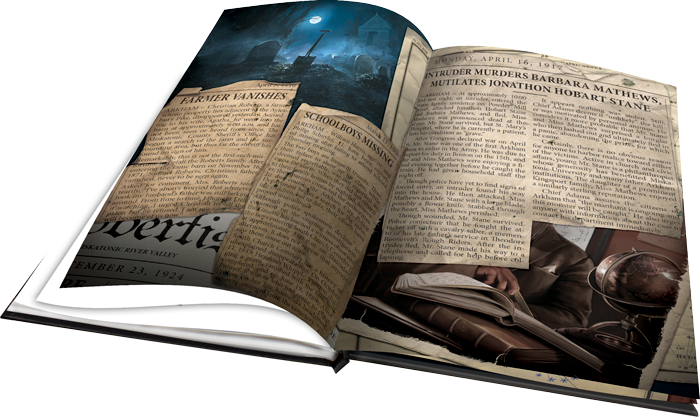 Among the story and its intrigues, you will find Withers’s own collection of notes and evidence. These detailed full-color inserts offer you the opportunity to take on the role of an investigator yourself and draw you deeper into the world of Arkham Horror, as represented through games like Arkham Horror: The Card Game. Within these pages of primary documents, you can race alongside Norman Withers to uncover the secret of the void and lift the veil long enough to retrieve your lost physicist friend before it’s too late. 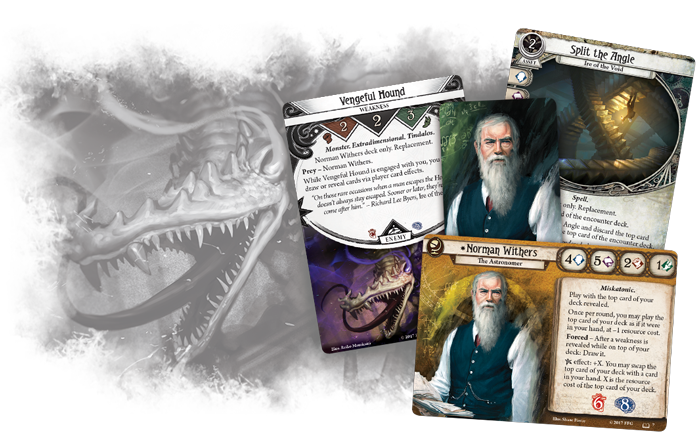 With insight into the movement of the cosmos, Norman Withers plays with the top card of his player deck revealed. When you choose to play as the Miskatonic astronomer, you may play the top card of your deck once per round as if it were in your hand at a reduced resource cost. But knowing what lies in your future does not always protect you from it, and like any human, Norman has his frailties. Whenever a weakness is revealed on top of his player deck, he must draw it.

Norman’s insight also comes into play with his elder sign effect. When an elder sign chaos token appears for one of his skill tests, Norman increases his skill based on the resource cost of the top card of his deck. Then, to ensure that you have the best chance of survival when you are playing as Norman Withers, you may swap the top card of your deck with a card in your hand. 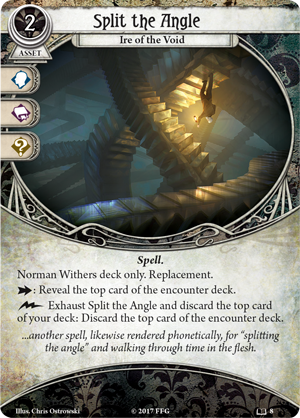 Over the course of Ire of the Void, Norman will gain new skills along with maddening knowledge that cannot be forgotten no matter how much he may wish. When Split the Angle is in play, you may use an action to reveal the top card of the encounter deck. From there, you may freely exhaust Split the Angle to discard that card alongside the top card of your player deck. This ability works beautifully when combined with Norman Withers’s ability to play with the top card of his player deck revealed. You will always know what the cost of discarding the encounter card will be, allowing you to make a well-informed decision.

From beyond the realm of science and sense come the hunting creatures known as the Vengeful Hounds.  These extradimensional monsters, also known as the hounds of Tindalos, seek Norman Withers as their prey. When faced with these maddening creatures, investigators may forget themselves in their desperation to survive. When you are engaged with the Vengeful Hound, you cannot draw or reveal cards via card effects, canceling Norman Withers’s ability and leaving him at the mercy of fate. But he has traveled too far and lost too much to surrender to these beasts. Norman Withers will fight with every ounce of strength and sanity he has left, and if you choose to join the astronomer in his fight for redemption and his search for answers, your perception of the world will be forever changed.

Look into the void. Add new cards to your investigations to discover what lies beyond the realm of science and defeat the monsters that reside there!