Across the five cycles of Arkham Horror: The Card Game, you’ve encountered new investigators in each new deluxe expansion, giving you more and more options for building your decks and exploring the mythos.

Now, you have the chance to invite a new faces to your games with the Harvey Walters Investigator Starter Deck.

Each Investigator Starter Deck includes a fully pre-built and ready-to-play 34-card investigator deck, as well as 26 additional cards that can be used to upgrade your deck as you play through a campaign.

You can simply pick out your favorite Investigator Starter Deck and start playing immediately.

Even if you’re a veteran player, there’s plenty of reason to pick up these Investigator Starter Decks.

Every starter deck offers a new investigator and a wealth of new cards entering the game for the first time, making these expansions the ideal way to quickly grow your player card collection and discover new ways to play. And of course, they’re perfect for helping a friend get started on their first campaign of Arkham Horror: The Card Game! 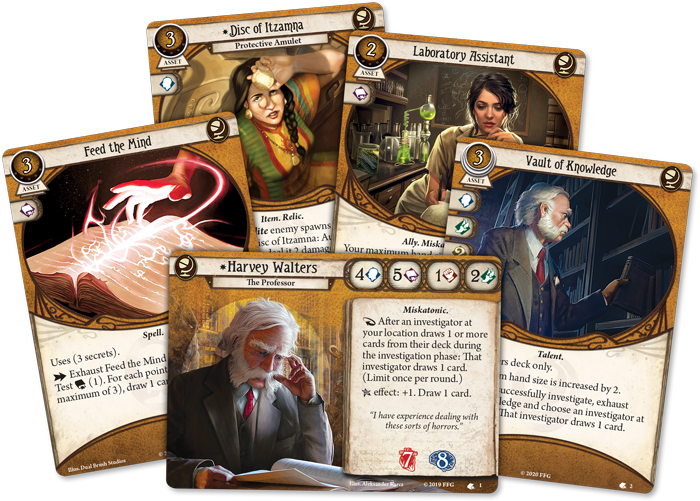 Professor Walters began as a devotee of the archaic and obscure, but over the years, he has discovered that his knowledge of ancient languages, profane relics, and strange rituals is vital to addressing dangers in the modern day. In Arkham Horror: The Card Game, Harvey Walters (Harvey Walters Investigator Starter Deck) boasts a vast intellect and deep wells of knowledge, which he can share with those around him by granting additional card draw to any investigator at his location.

You can hold even more cards with Harvey’s signature Vault of Knowledge (Harvey Walters Investigator Starter Deck, 3), which increases your hand size and lets you and your fellow investigators draw even more cards. And what will you do with all of the cards in your hand? While, aside from the nigh limitless options they give you, you can use the Celaeno Fragments (Harvey Walters Investigator Starter Deck, 6) to boost your stats for simply having cards in your hand. 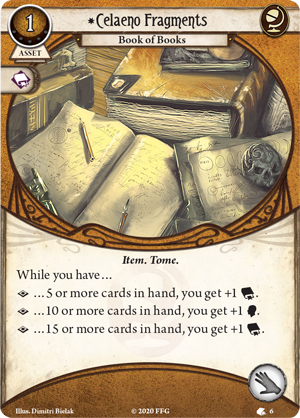 Harvey will undoubtedly learn more and more about occult occurrences over the course of your campaign, and you can spend that experience to upgrade your deck. You may take Mind Over Matter (Harvey Walters Investigator Starter Deck, 26) if you anticipate that you’ll need to fight or evade to get past the enemies that stand in your way. Or, you may delve straight into the manifold dark secrets of a Tome—particularly, The Necronomicon (Harvey Walters Investigator Starter Deck, 33).