The Lord of the Rings LCG - Revised Edition

The Lord of the Rings: The Card Game is FFG’s longest-running LCG, and it is getting a new core set.

With increased contents and some quality-of-life improvements, this new version of the classic LCG’s core set is the perfect opportunity for a new player to dive into the game.

The Revised Core Set box comes with everything you may need to kick off your adventures, including enough cards and components for four-player games right out of the gate

It also features campaign cards, boons, and burdens that are entirely new to the game, and for players who own the older core set, these cards will be available as print-and-play cards on FFG’s website for free.

The Lord of the Rings LCG – Revised Edition

Sometimes, in order to truly appreciate a tale, one must first go back to its beginning. Grand adventures and strong fellowships are important and wonderful, but the first step of any journey is just as important as the last. With that in mind, it’s time to return to the beginning of one of the most epic adventures of all…

With increased contents and some quality-of-life improvements, this new version of the classic LCG’s core set is the perfect opportunity for a new player to dive into the game. The box comes with everything you may need to kick off your adventures, including enough cards and components for four-player games right out of the gate. Read on to learn more about The Lord of the Rings: The Card Game and why it has been a fan favorite for over ten years!

Note: Veterans of The Lord of the Rings LCG will already know the information in the next section, and thus will want to skip ahead to the “What is New” section of this article. 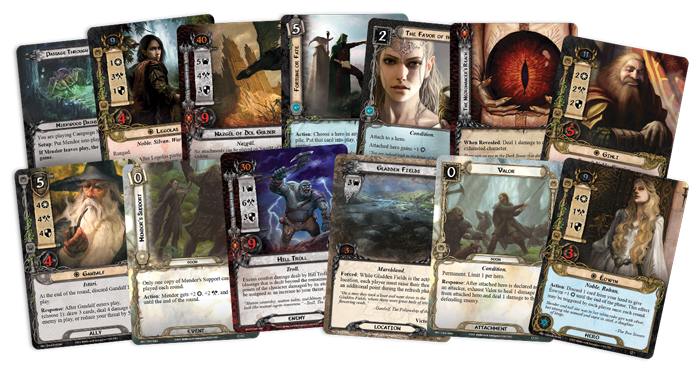 What is The Lord of the Rings: The Card Game?

For those of you who have never played The Lord of the Rings: The Card Game before, this game is a cooperative Living Card Game set in the fantastical world of Middle-earth. Players form Fellowships that undertake epic quests, travel through perilous locations, and battle vicious enemies such as Orcs, giant spiders, and the dreaded Nazgul. 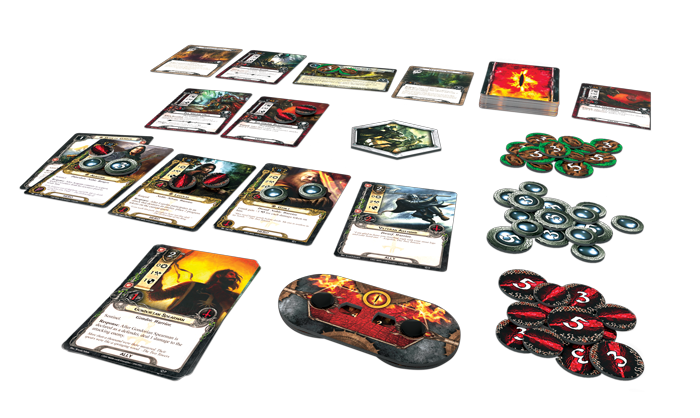 Each player chooses up to three heroes and builds a deck of cards that represents the strengths, abilities, tools, and allies of those heroes. During each round, you will do things like play ally and attachment cards to strengthen your heroes, send your characters on quests, travel to various locations, and defend against enemy attacks before launching attacks of your own.

All the while, you will need to keep your heroes healthy and carefully watch your threat value, the number that represents the influence of the Eye of Sauron upon you. Each round that passes will increase your threat value bit by bit, and if it ever reaches 50 or all of your heroes are defeated, you are eliminated from the game! 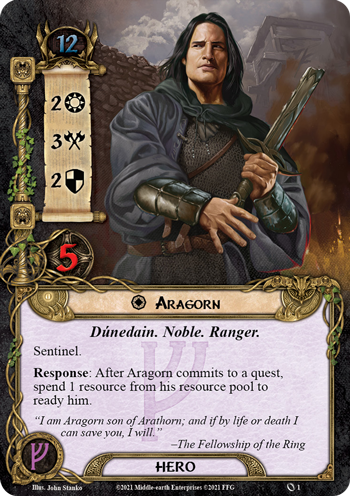 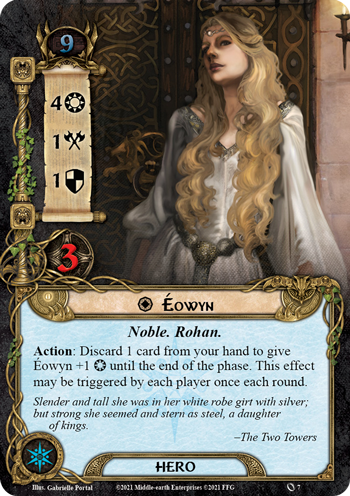 Each hero belongs to one of the four spheres of influence: leadership, lore, spirit, and tactics. Leadership heroes focus on abilities that bolster or defend other friendly characters, such as Aragorn (Revised Core Set, 1) using his Sentinel ability to defend allies or other heroes from enemy attacks. Lore heroes use their extensive skills and knowledge to support players in various ways, such as Beravor ’s (Revised Core Set, 12) ability to let a player draw 2 cards.

Spirit heroes specialize in quests and facing the dark machinations of the encounter deck head-on; whether or not the players succeed on quests is determined by their characters’ willpower stats, and Éowyn (Revised Core Set, 7) has a whopping value of 4 in this stat and the ability to boost it even higher. Finally, tactics heroes are all about combat, with abilities that deal damage, reward them for dealing damage, or simply boost their attack strength so they deal even more damage, such as Gimli ’s (Revised Core Set, 4) ability to increase his attack for each point of damage he has suffered.

As you can see, each sphere of influence lends itself to a particular playstyle, and the best part is you are not limited to just a single sphere while building your deck! You can mix and match heroes of different spheres as much as you like to create your own unique deck; however, take careful consideration as you do so. During the game, in order to play a card you must pay its resource cost.

Resources are generated by your heroes at the start of each round, and each hero has their own separate resource pool. You can only pay the cost of a card using resources from heroes of the same sphere of influence, which means that if you have only one hero of a certain sphere, then you can only use that hero’s resources to pay for that sphere’s cards. For example, if Gimli is your only tactics hero, then only his resources can be used to pay for the tactics cards in your deck—if you have a lot of tactics cards in your deck, then you may want to consider including a second tactics hero in your lineup. 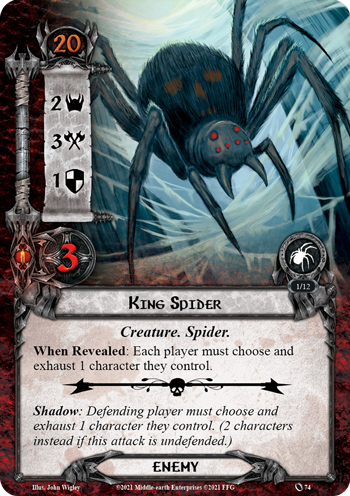 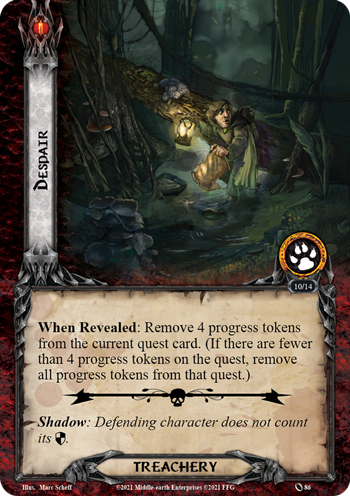 While each scenario of The Lord of the Rings: The Card Game plays out a little differently, the core mechanics remain the same in each game. Each round, you will decide which of your heroes and allies to commit to progressing the quest, which is how you complete the scenario. However, the more characters you commit to the quest, the fewer you will have ready to defend against enemy attacks.

Even weaker enemies like the King Spider (Revised Core Set, 74) can deal significant damage when undefended, while powerful enemies like the Hill Troll (Revised Core Set, 82) could potentially take out an undefended hero in a single hit. Striking the right balance between questing and combat is key to emerging victorious against the forces of darkness.

For the most part, this product is the same The Lord of the Rings: The Card Game that countless fans have known and loved for the past ten years. The rules are the same, and almost all of the cards included in the Revised Core Set are also the same. There are, however, three types of cards included in the Revised Core Set that were not part of the original release: campaign cards, boons, and burdens. 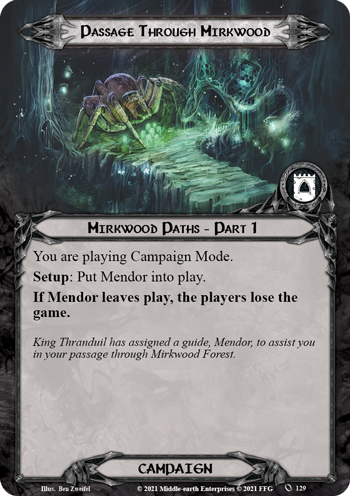 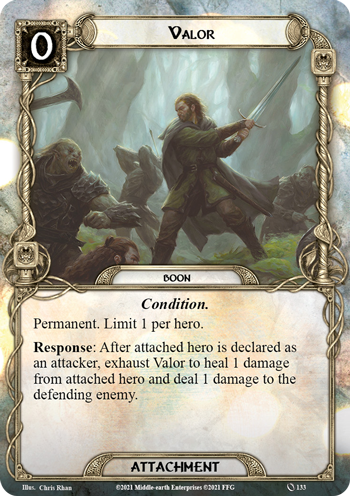 These three card types are all used in the new campaign mode that comes included with the Revised Core Set. In this mode, players can experience each of the core set’s scenarios in sequential order, and the results of each scenario can affect the outcome of the next one.

If you already own everything from The Lord of the Rings: The Card Game, you do not need to buy the Revised Core Set to experience this campaign—instead, we are pleased to announce that all campaign cards, boons, and burdens will be made freely available as print-and-play content on our website. We will also be posting the campaign rules and campaign log to the site as well, which means anyone who owns a core set for this game—original or otherwise—will be able to fully experience this new mode. 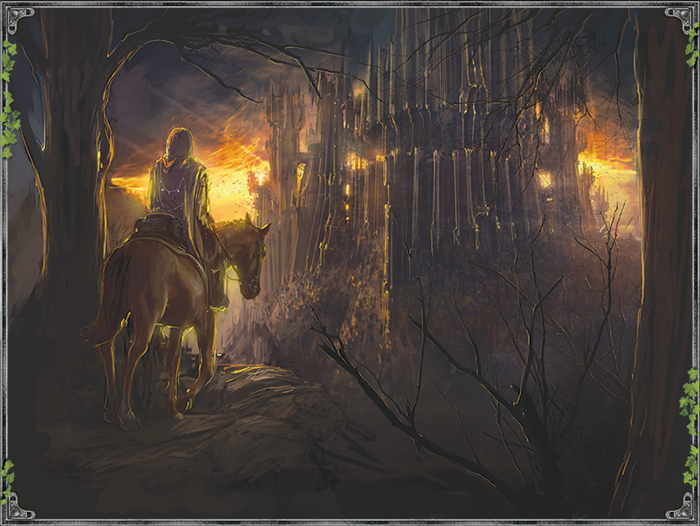 If you already own a core set for this game, then the release of the Revised Core Set is the perfect opportunity to introduce your friends to the game. Alternatively, if you played this game using a friend’s copy but have yet to pick up your own, then now is an excellent time to jump in! And remember, this box comes with enough content and components to support up to four players, including plenty of materials to ensure you and your friends have everything you need to start your adventure with this classic game.

The Road Goes On

The Lord of the Rings: The Card Game has been around for over ten years now, and the dedication of its fans has only proven that this game is something special. Because of this, the core set is not the only product getting a revised release; both new and existing fans can look forward to continued efforts to repackage and rerelease past popular content in the near future.