Terra Mystica: Merchants of the Sea

The factions of Terra Mystica have opened their doors for business beyond the trading post in Terra Mystica: Merchants of the Seas.

More trade flows between the factions with their brand new ships sailing on the rivers. A new large building, the shipyard, upgrades your shipping or range and produces ships with twenty faction board extensions.

Factions that export will receive VP and resources depending on the building they deliver to. Factions importing and receiving an opponent’s ship will gain power.

Ships will dig and build in adjacent hexes, so watch out! Ships can also be consumed and form new Dwellings.

The maps and most of the round scoring may also used be used with the base game if desired.

The Fire and Ice expansion is not required, but the material for them is provided.

Terra Mystica: Merchants of the Sea

The factions of Terra Mystica have taken to the rivers to expand their territory and enjoy the benefits of commerce! Starting with only a Dock, develop your faction’s nautical strategy for extra rewards, income, and advantages. Build your Shipyard to unlock new special actions and set out for distant lands, where your Ships will allow you to transform terrain and build beyond your usual scope. Or will you send your Ships to trade with other factions’ structures for mutual benefits? Trades can be lucrative, but be careful not to empower your opponents. The new Final Scoring tile included in Merchants of the Seas rewards the players who trade the most, but with over 30 tiles in total, there are countless ways to lead your faction to victory! 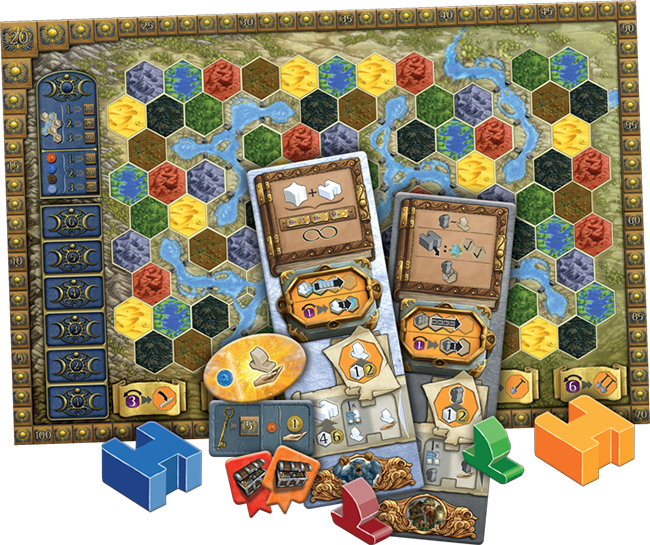 The residents of Terra Mystica are as varied as the landscape, and some are not natural sailors. While the rest of the factions hoist their mainsails, the Fakirs and Dwarves build Markets on land, and employ Merchants to peddle their wares and extend their territorial claim. Like Ships, Merchants can initiate trades with other factions’ structures, and the Fakirs and Dwarves can transform and build beyond their normal range by guiding their Merchants to outlying spaces of Terra Mystica. Merchants of the Seas includes a double-sided board with 2 new maps for factions to claim and develop, as well as revised Starting Victory points tables to ensure faction strength is balanced no matter the lay of the land. Return to Terra Mystica for a new age of trade and expansion in Merchants of the Seas!