There are some jobs battle droids just can’t complete. When a task requires a little more finesse, the Separatist Alliance doesn’t hesitate to hire a professional bounty hunter like Cad Bane.

Willing to take on any job with no questions asked, Bane doesn’t adhere to conventional tactics, instead manipulating others to his advantage.

This Star Wars Legion expansion puts all of Cad Bane’s skills at your disposal and gives you plenty of options for assembling the unpainted hard plastic miniature you find in it.

In addition to being able to choose whether Cad Bane enters battle with his signature wide-brimmed hat, you can also build the miniature with his dual LL-30 blaster pistols or with a single pistol and one hand activating his electro gauntlets.

Becoming one of the galaxy’s most notorious bounty hunters takes more than just skill with a blaster. You also need to outsmart your opponent, taking away their natural advantages while being ready to improvise when things don’t go according to your plan. To that end, Cad Bane brings a unique mixture of skill and instinct to every fight, keeping a cool head to accomplish his goals and force his enemy’s hand.

A reputation such as Cad Bane’s is earned through a willingness to take on even the toughest jobs. Jedi, clone, or Senator, no target is too dangerous for Cad Bane. For the right price, he’ll track his prey to the far reaches of the galaxy, even wading into the midst of battle to fulfill his contract. Like other bounty hunters, this gives him the opportunity to earn an extra victory token by defeating his chosen target and Cad Bane has his own set of tools for accomplishing this task.

Notably, he comes equipped with a pair of rocket boots that allow him to jump across terrain and cut off his quarry’s escape routes. On top of giving him a superior vantage point to open fire, Cad Bane is also a steady shot who can immediately fire his blasters after landing. Better yet, if he has been trained to make an Offensive Push,  he can use the opportunity to make this shot truly count by also gaining an aim token after making the move.

As dangerous as this may be, it is only one of many methods Cad Bane uses to disrupt his enemies and complete his jobs. Sometimes, capturing a target requires getting up close and a set of  Electro Gauntlets  can go a long way to subdue a mark. This, of course, requires closing in on a target, and he can always make use of some  Smoke Grenades  to screen his advance. 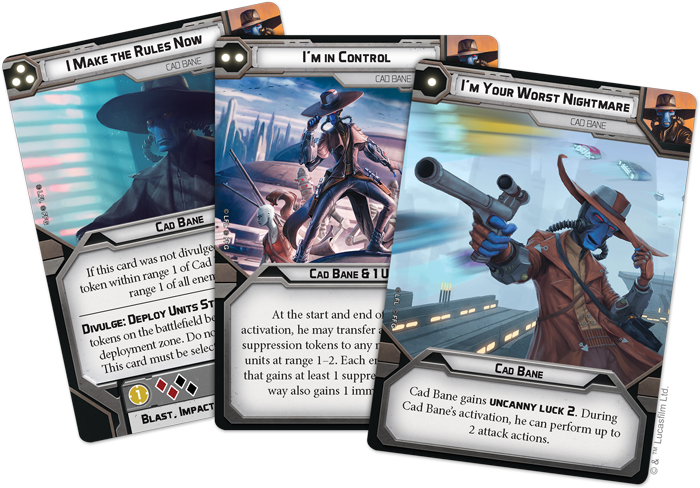 Even with the help of smoke grenades, bringing in a target is a risky proposition. Fortunately, Cad Bane’s instincts have been honed by years in the bounty hunting trade and his ability to sense danger gives him a better chance of avoiding damage. If that’s not enough, he can also use one of his command cards to become his opponent’s worst nightmare for a round. This card allows him to perform up to two attack actions and—even if doing so leaves him open to retaliatory fire—combine his danger sense with some uncanny luck to supercharge his defense rolls.

In order to take on targets as skilled as those Cad Bane routinely faces, he often needs to do more than attack. To this end, he also deploys some unconventional tactics to take control of his opponents and frustrate their efforts. At the same time as he’s closing in on an enemy unit, he can also cut off their comms  to further isolate them from the rest of their army. For even more of an impact, he can  assert his control  of the situation by transferring any number of his suppression tokens to nearby trooper units, improving the cover of friendly units and slowing down or completely stopping enemy units who receive these tokens.

Cad Bane clearly enjoys controlling the tempo of battle to give himself an advantage, but he rarely enters an encounter without a plan. If you choose, he can rewrite the rules in his favor. This card lets you further manipulate your opponent with a set of three unique Bane tokens that are placed facedown and have their own effect once an enemy mini movies, deploys, or is placed at range 1 of one and has line of sight to it.

If you did not divulge this command card, you could potentially set a trap for enemy forces, placing the Kablamo! Bane token and detonating the weapon on the card when it is revealed. Alternatively, divulging this card during the Deploy Units steps lets you place all three tokens beyond range 1 of any deployment zone and leave your opponent guessing. It could just be Smoke and Mirrors and have no effect beyond removing the token, but it could also be the Here I Am token, causing Cad Bane to appear and replace this token on the battlefield or, if he is already on the battlefield, instantly move to this token. Either way, Cad Bane can quickly ambush a unit or snatch an objective out from under them.

Cad Bane will take any job for the right price, and he has the skills to bring in any target. Add him to your army and make your own rules!