ARC Troopers are among the most elite clone troopers, utilizing specialized equipment and intensive training to push their physical, tactical, and strategic skills to the limit.

These troopers are capable of undertaking the most arduous missions, and the unshakable resolve has turned the tide of many vital battles in the Clone Wars.

No matter how you decide to use them in battle, you’ll find plenty of ways to customize your miniatures in this expansion.

In addition to multiple helmet options for every ARC Trooper, some troopers can be assembled wielding dual DC-17 hand blasters or with a powerful DC-15x sniper rifle.

Finally, several troopers are highly posable as they blast into action with their JT-12 jetpacks.

In addition to their appearance, eight upgrade cards let you outfit your ARC Troopers in battle and two unit cards let you add them to your army as either a full unit or a two-man strike team.

Despite being bred from the same genetic template, not all of the Republic’s clone troopers are the same. Their true test comes on the battlefield, and those who distinguish themselves in combat are bestowed with the title of ARC Trooper.

Widely regarded as the best soldiers in the Grand Army of the Republic, these elite clones have turned the tide of many vital battles in the Clone Wars. Soon, you’ll be able to call about these unshakeable troops with the ARC Troopers Unit Expansion for Star Wars™: Legion!

When you’re ready to deploy them to the battlefield, the ARC Troopers are an adaptable unit made even more versatile by eight upgrade cards that invite you to outfit them with additional heavy weapons, gear, and more.

ARC Troopers represent everything clone troopers can be. More than just fine soldiers, they display a commitment to their Jedi Generals and their fellow clone troopers that goes above and beyond the call of duty. As such, ARC Troopers are called upon to embark on the most critical missions and use their unshakeable resolve to turn the tide of battle in the Grand Army of the Republic’s favor.

In the chaos of combat, ARC Troopers can be counted on to take the lead and set the tone for their fellow troops. Scouting ahead as soon as they hit the ground, they are considerablly more mobilite than other troops, allowing them to take up advanced positions and get the drop on enemy forces. This mobility is only enhanced by the wide variety of equipment they can carry into the field, including  Ascension Cables  and  JT-12 Jetpacks,  making ARC Troopers a truly versatile fighting force.

Whether they use these tools to skirt an enemy’s flank or wade straight into the action, ARC Troopers have the training to deal with any situation. A healthy dose of  Situational Awareness can help them escape even the most precise enemy fire, while carrying some EMP “Droid Popper” grenades can help slow the advance of the hordes of Separatist battle droids they routinely face.

In addition to these tools and their superior training, ARC Troopers also wear enhanced armor that gives them even more protection than standard clone armor, helping them withstand attacks made by weapons that normally pierce through defenses. When they go on the offensive, meanwhile, ARC Troopers combine the aim tokens they gain after performing standard moves with their sharpshooting skills to pressure even the most heavily fortified enemy positions while on the move. 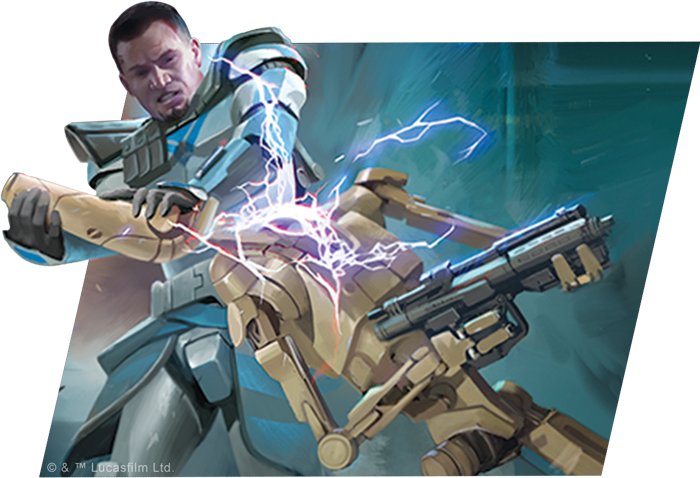 All of these skills make ARC Troopers highly versatile units that can tackle a variety of tasks and this versatility is even more pronounced by the fact that they can be deployed as two distinct units. Adding a full squad of ARC Troopers to your army gives you a powerful force that can stand toe-to-to with even the most difficult targets. A two-man ARC Trooper strike team, meanwhile, is a cheap and deadly alternative that focuses on a single heavy weapon such as a DC-15x sniper rifle  to get the job done.

But ARC Troopers can contribute more to your army than just their skill with specialized weaponry. Each ARC Trooper is an example to the troops around them and this expansion includes two exceptional ARC Troopers who can either fight alongside their fellow ARC Troopers or bolster one of the Republic’s corps units. Beyond boosting the combat effectiveness of his unit, Fives takes command, coordinating with other clone units to make the entire army more effective. 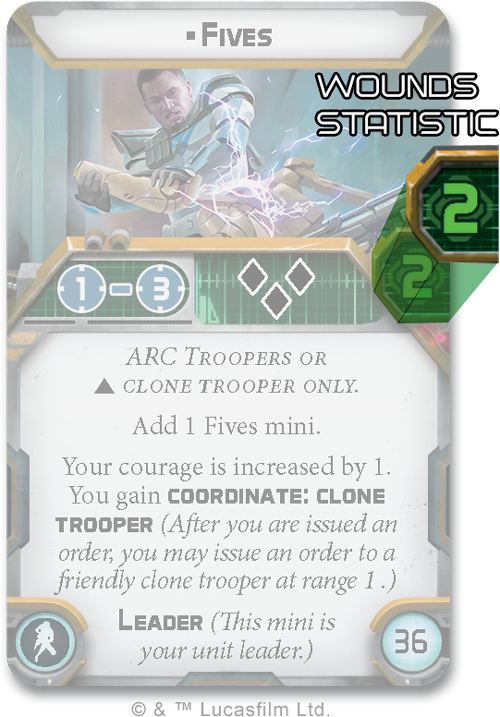 Alternatively, you could choose to make your unit an even more powerful long-range threat with Echo. Like Fives, his combat expertise improves the entire unit, giving it a surge token at the start of the Activation Phase. This makes him an especially effective leader of a unit of Phase II Clone Troopers, who become all the more flexible with two surge tokens.

Both Echo and Fives lend their specific skills to whatever unit they’re assigned, but these ARC Troopers also provide a more basic benefit. Their upgrade cards feature an additional wounds statistic that they use instead of the wounds statistic of the unit they’re equipped to, making them even tougher than the average clone trooper. When you send them on a mission, you can be sure they’ll do everything they can to complete it.

On the Front Lines

Battle tested and ready for any assignment, ARC Troopers are the best of the best. Enhance your armies with these elite troops!