Orginially created by Ultron to destroy the Avengers, the android known as Vision joined the ranks of Earth’s mightiest heroes instead.

Now he uses his incredible powers to protect the planet from danger as The Vision—and he’s phasing into players’ games of Marvel Champions: The Card Game.

By manipulating his own mass to become dense or intangible, Vision can defeat any opponent.

Within this Hero Pack, players will find Vision, his sixteen signature cards, and a full assortment of Protection cards inviting players to safeguard their friends.

For players eager to destroy the Mad Titan, they can get started with the Vision Hero Pack! This expansion comes with a 40-card pre-built deck, giving players the chance to start playing right out of the box.

Originally created by Ultron to destroy the Avengers, the android known as Vision joined the ranks of Earth’s mightiest heroes instead. Now he uses his incredible powers to protect the planet from danger as The Vision.

This incredible android Avenger phases into battle in this expansion pack, which introduces Vision as a new playable hero along with his sixteen signature cards. With a pre-built Protection deck ready to play from the get-go, you’ll be ready to face your enemies with Vision’s unique density-manipulating gameplay from the moment you open the box. With high durability and a plethora of abilities to punish villains, Vision is an adaptable hero that can be an asset to any team! 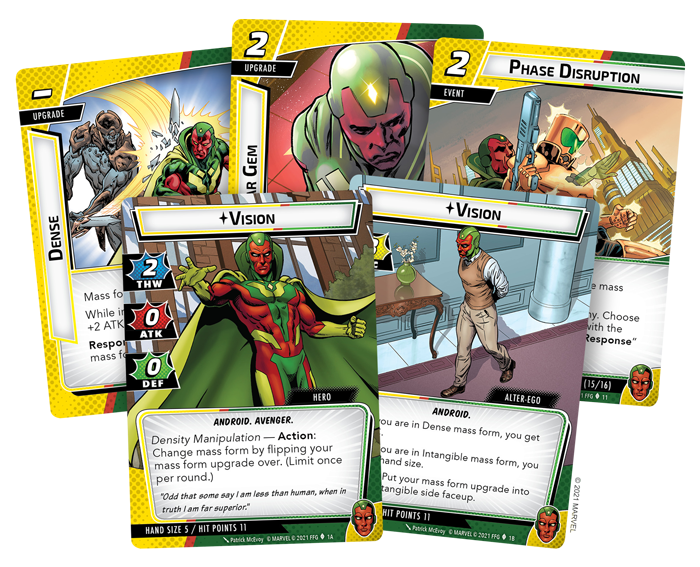 As a being originally created to be a mighty weapon, Vision has a versatile spread of abilities that build off his core mechanic of density manipulation. His deck comes with a special sixteenth signature card referred to as his mass form upgrade, which is a two-sided upgrade that is always in play. On one side is Vision’s Intangible (Vision, 2A) form, which protects him from harm but prevents him from attacking or defending. On the other side is his Dense (Vision, 2B) form, which allows Vision to attack and gives him a boost to his ATK and DEF stats. 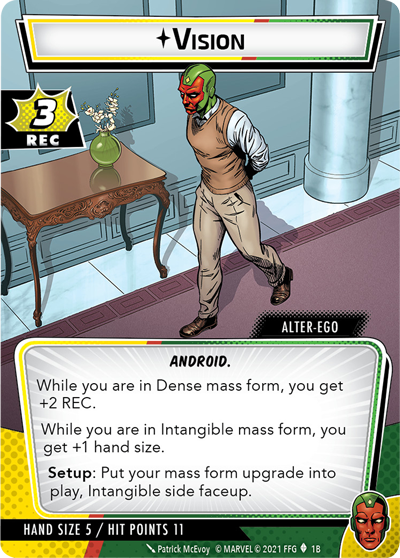 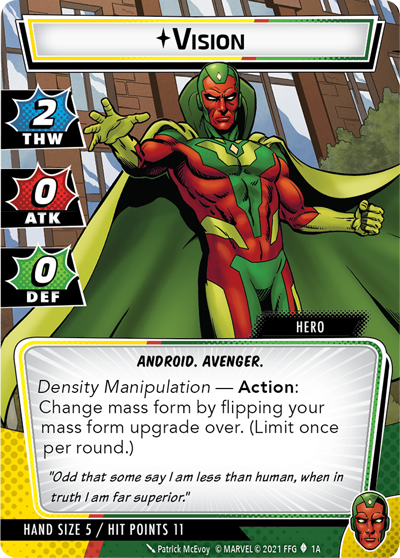 Most of Vision’s signature cards play off his mass form in some way. Even his alter-ego (Vision, 1B) form is affected by it—his recovery is nearly doubled while in Dense form, and his hand size is slightly higher while Intangible. If Vision starts his turn in both alter-ego and Intangible forms, then he can flip to his hero form (Vision, 1A) and use his Density Manipulation ability to swap to Dense form. Doing so comes with the added bonus of Vision drawing a card, which means he could essentially start that hero turn with seven cards in hand!

A lot of Vision’s other cards are affected by his current form as well. Vision’s Cape (Vision, 6) gives him retaliate while in Dense form and stalwart while Intangible, and Solar Beam (Vision, 8) is either an attack or a thwart event depending on which form he’s in. Changing mass forms at the right time is a key aspect of Vision’s strategy, and through Density Control (Vision, 7) you can get multiple uses out of powerful events like Phase Disruption (Vision, 11) and Mass Increase (Vision, 12).

With so many ways to take advantage of Vision’s mass manipulation, you will find that every round presents new and exciting strategies to try out. 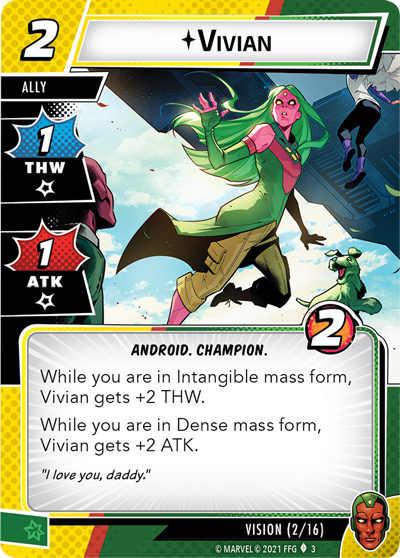 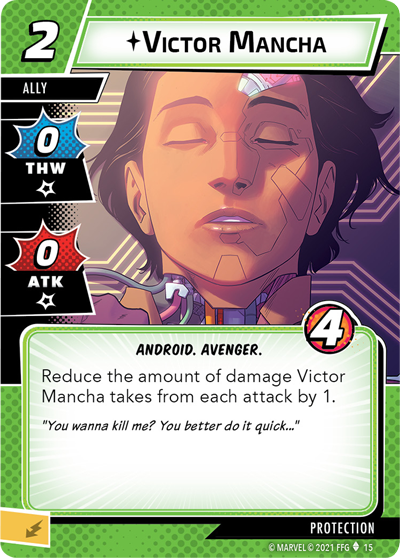 Outside of his mass form, a lot of Vision’s pre-built deck also focuses on synergies between Android characters. You can use 616 Hickory Branch Lane (Vision, 4) to search for Vision’s daughter Vivian (Vision, 3) or another Android ally and add them to your hand. Victor Mancha (Vision, 15) can survive multiple hits from low-attack minions while Machine Man (Vision, 22) can be a heavy hitter if you have resources to burn.

Use Jocasta ’s (Vision, 13) ability to pull a useful Defense event like Defiance (Vision, 18) out of your discard pile, then play that event to trigger Flow Like Water (Vision, 16) and punish an enemy that attacks you. On particularly important turns, play Reboot (Vision, 24) to get an extra use out of one of your allies, or even Vision himself!

As an iconic member of the Avengers and a hero with a versatile toolkit, it comes as no surprise that Vision is completely at home on any hero team. Bypass Thanos’s defenses and protect your allies from the Mad Titan’s assault.