As the fourth campaign expansion for Marvel Champions: The Card Game, Sinister Motives introduces several Spider-Man-related characters and scenarios to the game.

Ghost-Spider and Spider-Man (Miles Morales) join the fray with fully pre-built and ready-to-play player decks filled to the brim with new cards.

Whether players try out these new champions or stick with old favorites, they can test their skills against iconic Spider-Man villains, including Sandman, Venom, Mysterio, and the Sinister Six.

Each of these villains offers unique challenges to overcome, and while players can take them on in any order as standalone scenarios, the expansion also comes with a brand-new cinematic campaign for Marvel Champions: The Card Game!

In the Marvel universe, those six words carry great significance as the driving principle behind one of the greatest heroes ever known: Spider-Man. This web-slinging, wisecracking hero is beloved by many, but he also has his fair share of mortal enemies. Fortunately, Peter Parker is not the only wall-crawler protecting the streets of New York from villains and their sinister schemes…

In this expansion, you and your fellow heroes take to the streets and rooftops of New York City and face off against a rogues gallery of classic Spider-Man villains, including Sandman, Venom, Mysterio, and the notorious Sinister Six. As with previous expansions, you can play each of these scenarios individually or as part of a larger campaign, and with a sinister spread of new modular encounter sets, there will be ample opportunity to mix things up for all of your Marvel Champions games. Sinister Motives also kicks off a new wave of playable heroes for the game, starting with two iconic web-warriors: Ghost-Spider and Spider-Man (Miles Morales), both of whom come with fully pre-built and ready-to-play decks right out of the box. 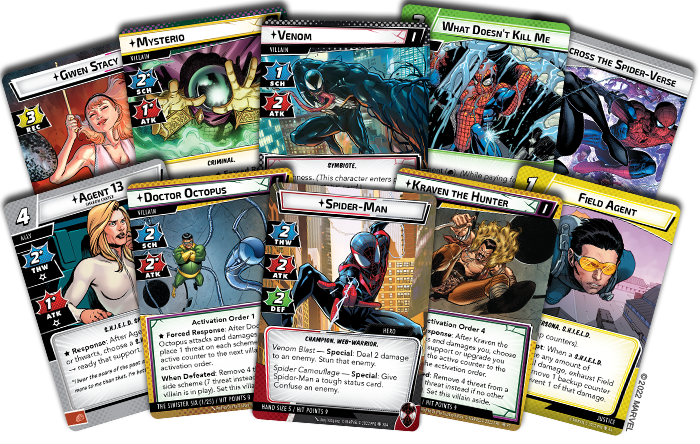 New York City. The Big Apple is home to some big names, both on the side of the law and against it. Somebody has hired some particularly big names to stir up trouble for our heroes, and so we kick off the Sinister Motives campaign with Sandman (Sinister Motives, 61). 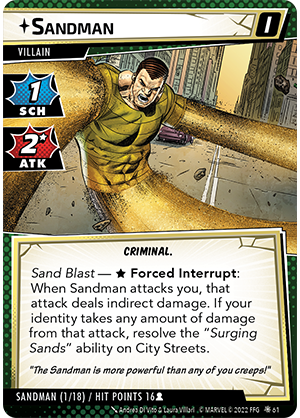 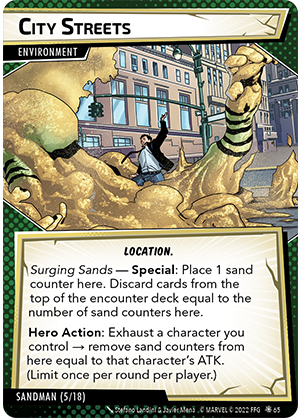 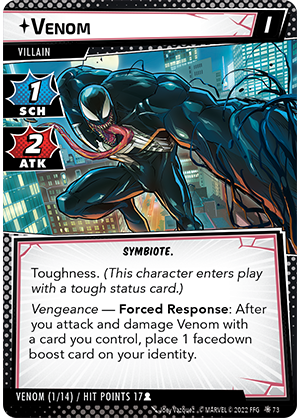 Not long after catching Sandman, the heroes will have to deal with the wild and dangerous Venom (Sinister Motives, 73). This symbiote-empowered villain puts facedown boost cards on your identity every time you attack and damage him, and his main scheme, “Leave Us Alone!” (Sinister Motives, 76B) lets him use all of those extra boosts when he activates against you! This causes Venom’s damage output to ramp up fast, but fortunately, this villain has a signature weakness that you can exploit: the bell tower. 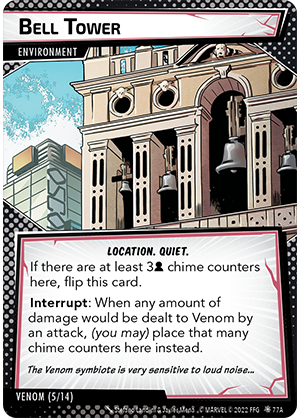 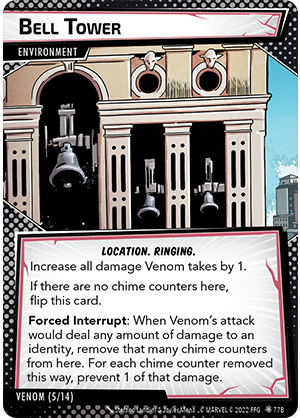 While the tower is quiet (Sinister Motives, 77A), you can choose to build up its chimes instead of damaging Venom (and giving him extra boost cards to use against you). Then, once the bell is ringing (Sinister Motives, 77B), take advantage of the increased damage dealt to Venom to take him down in as few hits as possible! Just be careful—Venom may be aggressive, but he isn’t a fool, and sometimes he will Guard the Bell Tower (Sinister Motives, 79) to stop you from using it to your advantage.

Once you get Venom to calm down, you won’t have much time to rest, because next you must face the baffling Mysterio (Sinister Motives, 84), the campaign’s third villain. 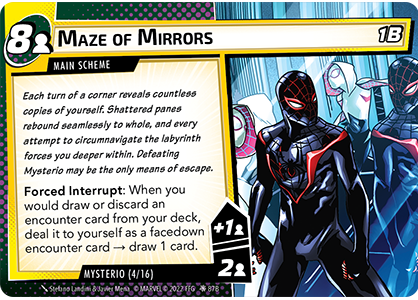 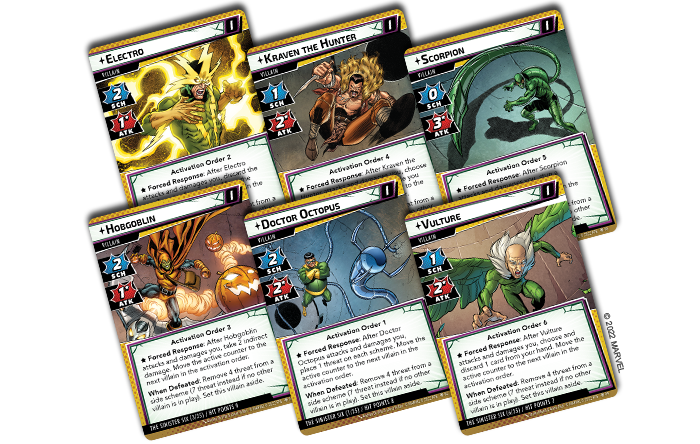 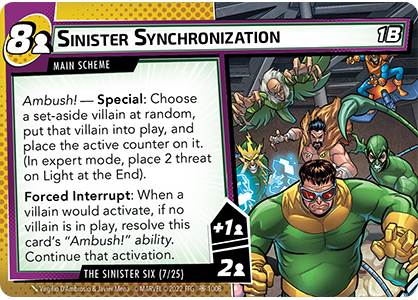 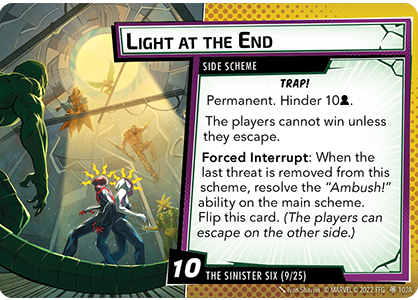 By now, you may be wondering who the final villain in Sinister Motives will be. We’re not going to reveal who it is today, but we will leave you with this hint: what happens when you combine the abilities of two quintessential Spider-Man villains? The answer is a truly terrifying and formidable foe!

The villains in Sinister Motives are an unruly bunch, and they can make things extremely unpleasant for the citizens of New York. Fortunately, this expansion also comes with two high-speed heroes ready to swing in and protect their city! 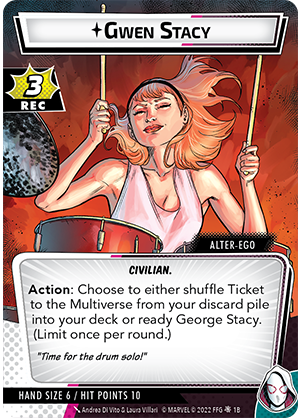 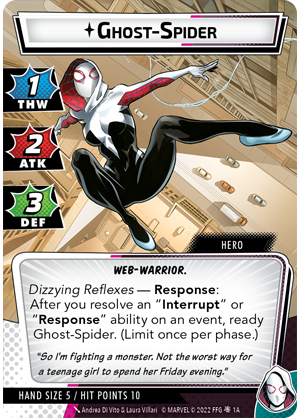 That said, sometimes pulling off Ghost-Spider’s killer combos may require a bit of setup, but fortunately Gwen (Sinister Motives, 1B) has access to some handy assets to get her momentum going. Gwen’s father, George Stacy (Sinister Motives, 7), can hang onto event cards for you until the moment you need them, while Ticket to the Multiverse (Sinister Motives, 8) is a powerful upgrade that can completely reset your turn once per game! 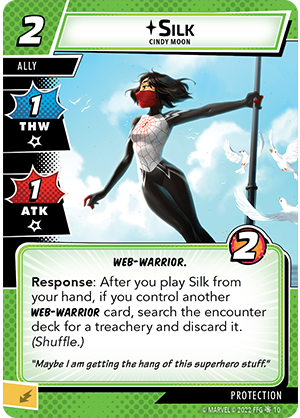 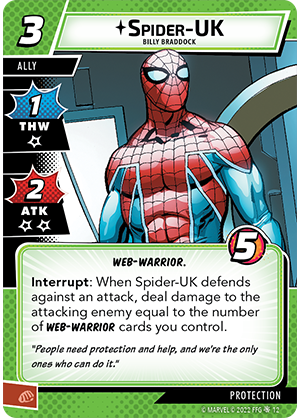 Befitting her react-and-punish playstyle, Ghost-Spider comes with a pre-built Protection deck that can help her lock down the villain phase. Use Across the Spider-Verse (Sinister Motives, 18) to call on the aid of fellow web-warrior Silk (Sinister Motives, 10) to preemptively discard a treachery card from the encounter deck, and with Spider-UK (Sinister Motives, 12) on defense, you can deal some solid damage to an enemy that dares to attack you. Jump Flip (Sinister Motives, 14) out of the way of an attack to trigger your Dizzying Reflexes, and if a villain phase is particularly nasty, use What Doesn’t Kill Me (Sinister Motives, 16) on your next turn to help you regain your momentum—just make sure you have at least one “physical” resource available to pay for it! 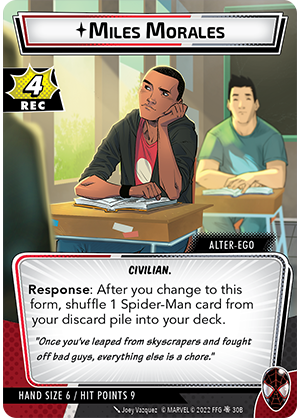 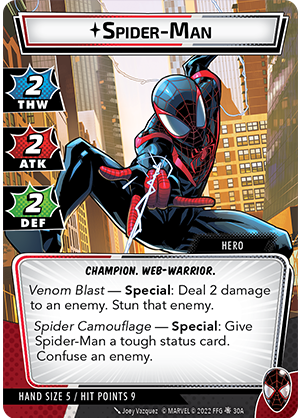 Sometimes, you may not have the resources to pay for all those events but still want to activate Venom Blast or Spider Camouflage. That’s where upgrades like Power Within (Sinister Motives, 37) and Defense Mechanism (Sinister Motives, 38) come into play, allowing you the freedom to trigger those abilities at precisely the right moment. If you’ve burned through most of Spider-Man’s cards, swap to alter-ego form to get one back into your deck, then take advantage of your Double Life (Sinister Motives, 32) to leap right back into the fray. 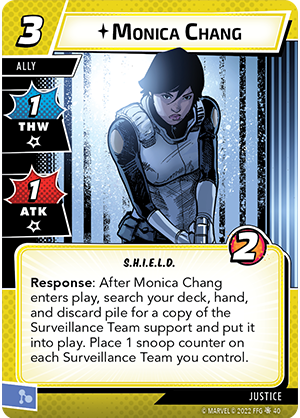 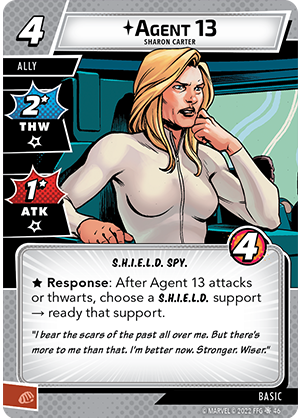 *Note: Even though Spider-Man (Miles Morales) shares his hero name with Spider-Man (Peter Parker) from the Marvel Champions core set, their identity-specific cards are not interchangeable. This includes their hero cards, obligations, and nemesis encounter sets.

It’s time to take to the streets for some web-slinging action. Fans of Marvel Champions: The Card Game won’t want to miss out on this thrilling wave of content when the Sinister Motives campaign expansion launches in spring of 2022—and of course, they can also look forward to more heroes joining the ranks of Ghost-Spider and Spider-Man against the threat of the Sinister Six with the four new hero packs soon to follow!