A Game of Thrones: The Card Game - The Things We Do For Love

A new age of A Game of Thrones: The Card Game begins with the The Things We Do for Love!

This expansion contains 88 cards that draw on the game’s rich history as both a CCG and LCG, bringing powerful and iconic cards from earlier eras of the game’s life to the second edition of the A Game of Thrones LCG.

Whether it be the return of iconic characters like Mad King Aerys, or fan-favorite locations and plots, players will find plenty to be excited about.

Within this Pack you will find:

This is not a standalone product. A copy of the A Game of the Thrones: The Card Game Second Edition Core Set is required to play.

A Game of Thrones: The Card Game – The Things We Do For Love

A Game of Thrones LCG has taken you from the opening pages of A Game of Thrones to the closing chapters of A Dance with Dragons, fighting alongside the greatest warriors of Westeros on the battlefield and plotting courtly intrigues with the finest schemers of the realm. You have stepped beyond the pages to explore the world of A Song of Ice and Fire free from the bounds of time. Through six cycles, you have seen the game evolve, inviting you to find new ways to fight your battles and challenge you to change alongside the world of Westeros. 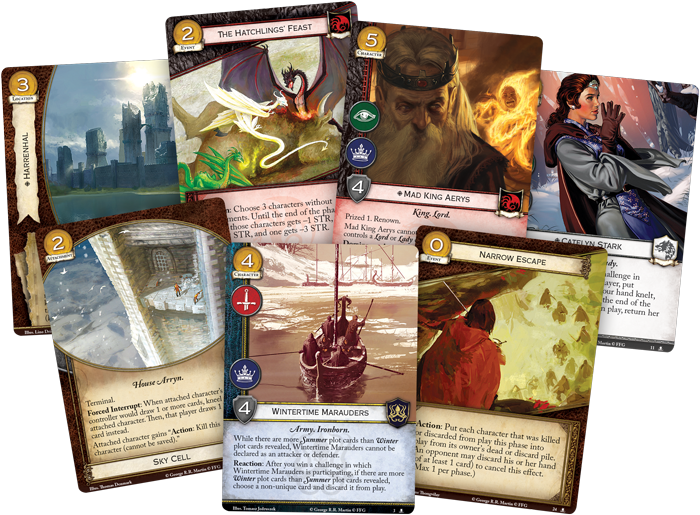 A Change of Seasons

Each of these carefully selected cards have been updated to fit within the current meta while still holding true to the original spirit of the card. For some, this simply means updating traits or cleaning up text while others, like Catelyn Stark (The Things We Do for Love, 11) have new costs or STR values to better align with how the card would fit in the current state of A Game of Thrones: The Card Game. 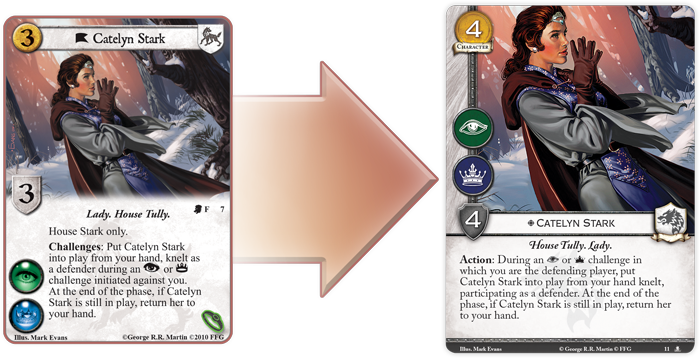 In either case, the card’s original art is maintained to celebrate the game’s past as we look forward to its future. The Things We Do for Love also includes a comprehensive insert with a letter to fans from lead designer Nate French, as well as a look at the game’s rich history and an explanation of each included card’s place within that history—offering you a peek behind the curtain at the decision-making process and a chance to see how the game has touched the life of one of its creators.